< Back to the previous page

Now that’s what I call inflation

Now that’s what I call inflation

With Kate Bush topping the charts, Top Gun back on the big screen and national rail strikes afoot, you’d be forgiven for thinking it’s the eighties all over again. Now teetering on the brink of double figures, UK inflation offers another flashback to the way things were four decades ago.

We’ve talked about inflation in previous WRAPS™ newsletters, but at the risk of sounding like a broken (Our Price?) record, we’re taking another look now that the UK Consumer Price Index (CPI) has hit 9%.

Times are tough. With the ongoing Ukraine invasion, global supply chain shortages, an energy crisis and fallout from the pandemic and Brexit, the cost of living has soared. At the same time, markets are starting to drop off, having seemingly lost the momentum of the last couple of years. While there’s no use burying your head in the sand, this is no time to panic. It’s not the first time we’ve been here.

Inflation: Where we’ve come from

Let’s face it: we’ve had an extremely easy run from the early nineties up until last year, enjoying an unprecedented thirty years around the Bank of England’s inflation target of 2%.

Whether the thought of reliving the eighties inspires nostalgia or dread, you have to go back to 1982 for the last time UK inflation saw double digits. The decade opened with an average UK inflation rate of 18% before settling down to around 7.8%. Those with longer memories will remember the pain that came before this. In 1975, inflation soared to over 24% – the UK’s highest post-war level. 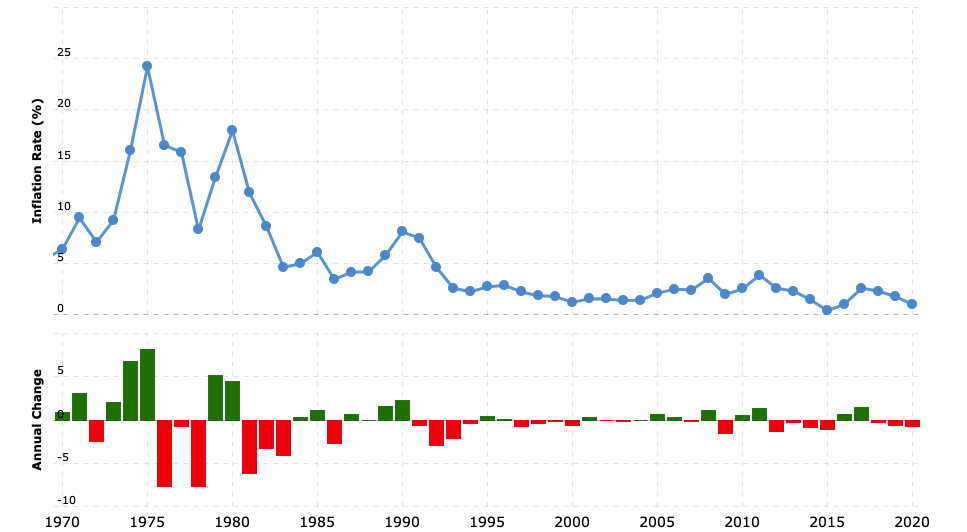 Unfortunately, today’s upward pressures on inflation aren’t going away in a hurry. The key drivers of this crisis – a pandemic, a war and Brexit – are thankfully all rare and unusual events, but this also means there are no easy fixes. These influences are likely to cause disruption for years to come.

The Bank of England admits that UK inflation may well hit 10% this year, but it’s forecast to go no further before reversing direction to near 2% in two years.

Markets: Down but not out

In the last WRAPS™ newsletter, we reassured you that investment markets have been resilient despite the volatile landscape. The last few months, however, have been less encouraging, with equity markets the world over experiencing a bit of a downturn.

As with markets on any given day, performance should be viewed in a wider context. Let’s look at how our WRAPS™ Confident Portfolio has fared over the last five years against inflation (represented by the red line).

Excluding a drastic Covid-related dip in early 2020, it has been on the up until the last six months. Compare this current dip to the previous five years and you’ll see it’s still outperforming all previous years, bringing in cumulative returns of over 39%. Barring a couple of short blips, it has consistently been well above the inflation benchmark.

This helps confirm our belief that the best way to beat inflation is through a diverse, equities-based portfolio invested over the long term.  Although your instinct may be to collect and run when markets drop, staying put and reinvesting dividends back into the market is a tried-and-tested way to boost your post-inflation returns over time.

Between May 1972 and December 1974, the UK stock market (the FT30 Share Index back then) fell a staggering 73%. Time for investors to pack up and go home? Anyone that did would have locked in their losses and missed out on some serious bargains in the January sales, as the FT30 gained 72% in just 18 days, increasing by over 150% by the end of 1975.

Similarly, the S&P 500 brought total returns of 77% over the 1970s – three-quarters of which were thanks to dividends and dividend reinvestment.

History repeatedly shows that markets will recover their losses given time. Since the UK launched the FTSE 100 in 1984, there’s never been a ten-year holding period where an investor would have lost money. Over the 35 years between 1984 and 2019, nominal returns have averaged 7.75% – comfortably beating the UK inflation average of 2.7% over that time.

Keep calm and carry on

Don’t forget that the official inflation rate is based on an average basket of goods, so how it actually affects you depends on what’s on your shopping list. At times like this, you can benefit from adjusting your short-term behaviour when it comes to spending, but you should always have a long-term mindset when investing.

At Wealth Matters, we keep an eye on what’s going on with inflation, markets, and any other external shocks, so you don’t have to. So go ahead and read the news, but rest assured that we’ll keep a clear head and look after your portfolio with the usual rational, evidence-based approach. No knee-jerk reactions required, but we will fine-tune your portfolio when appropriate to help you get the best results.

In the video below, part of our ‘How to invest’ series, we explain the importance of holding your nerve when markets waiver, even when your instinct is to flee. At any time, self-awareness, resilience and a clear head are critical to making sensible, smart financial decisions. That’s how successful investors got through the seventies and eighties, and that’s how we’ll get through this.

Watch ‘How to Invest: Be Aware of Your Biases’:

You can find our whole video series on the resources page of our website.

You can find out more about which cookies we are using or switch them off in settings.

Your browser is out-of-date!

Update your browser to view this website correctly.Update my browser now

This website uses cookies so that we can provide you with the best user experience possible. Cookie information is stored in your browser and performs functions such as recognising you when you return to our website and helping our team to understand which sections of the website you find most interesting and useful.

Strictly Necessary Cookie should be enabled at all times so that we can save your preferences for cookie settings.

If you disable this cookie, we will not be able to save your preferences. This means that every time you visit this website you will need to enable or disable cookies again.